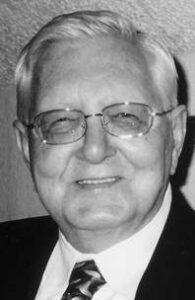 Mr. Ernest Voisin was born fifth of nine children on October 17, 1927 to Linest and Lorena Voisin on Bayou Dularge in Theriot, Louisiana. Being taught the Cajun-French language as a child, Ernest – nicknamed Blon’ (blonde in French), learned the English language by being forced to speak it in school. His father worked hard just to put food on the table. Linest (fifth generation directly from France) fished oysters, shrimp, and crabs spending many winter months trapping fur animals in the marsh lands. He instilled in young Blon’ a no-nonsense/use your head work ethic which stayed with him the rest of his life. Ernest, after graduating High School, worked with his father for a couple of seasons fishing. He then became somewhat restless and in the summer of 1947 headed out to Southern California.

This was a huge step in his development of becoming a unique individual. He experienced an entirely different life style and culture and it certainly rounded out young Ernest’s perspective on life. He searched for and found the one and only job he held while living out west at a reinforced plastics manufacturing facility. He soon met wife #1 (Mary) near a horse race track that he would frequently visit. Together they had 5 children and eventually settled in Torrance, California which is located approximately 30 miles south of Los Angeles along the coast. The company he worked for, although small when he started, experienced continual expansion through his 24 years often times due to Ernie’s effort, enthusiasm, and ability to develop process lines and manage personnel. A bump in the road came after fourteen years of marriage ended in divorce. Not long after things had settled down he married wife #2 (Joyce). At this time Ernie began planning his move back home. Contemplating what he would do back on the bayou, he and his youngest brother Charles spent countless hours at our dining room table designing an automatic oyster dredge which they both felt was needed in the oyster industry. Eventually the dredge design and blue-print were complete and both Ernie and Charlie made the move to the bayou along with Ernie’s twin sons Mike and Steve. They immediately began construction on the automatic dredge and upon completion installed the mechanism onto an oyster boat – the Miss JoAnn. The trial and error phase was not without difficulties and took longer than expected. Therefore, in order to make ends meet, Ernie purchased several oyster leases and began harvesting sack oysters, established a dock for unloading the sacks, opened an oyster processing facility, and began to develop customers. Eventually Charlie decided to pursue other interests and Ernie’s oldest brother, Lynwood, came on board and helped develop the oyster farm for a few years. “Motivatit” was incoporated in 1971. The early years were exciting yet exhilarating for Ernie. He had his sons experiencing different aspects of the business – both land and sea! Through the years his day by day management style, his engineering talent, his willingness to take risks, his business relationship skills, and his great vision enabled him not only to survive but to prosper. His final 10 years were spent with wife #3 (JeanAnn). His two sons were running the business with several grandchildren participating. He was well pleased with the way things had unfolded throughout his life and left us peacefully on September 10, 2009. We love and miss him dearly and continuously draw from the things he taught us. He accurately predicted in August of 2009 during the preseason, a New Orleans Saints Super Bowl victory!

A Tale of Coon Skin Abbey

As told by “BLON” Ernest A. Voisin

Long before the bayou road was paved, a gentleman known as Coon Skin Abbey dwelled in a camp on the lower extremity of Bayou Dularge. The camp was accessible only by way of the water. He lived at the camp year round and hunted for rabbit and deer in the fall, trapped fur animals in the winter, trawled for shrimp and tonged for oysters in the spring, and netted finfish during summer months.

Way up the bayou, alongside the shell road, a young man named Blon Voisin lived with his folks, three sisters, and five brothers. One day Blon prepared for a trip on his pirogue to visit Coon Skin Abbey whom he had met when his father had taken him trawling for shrimp the prior spring. He hoped to meet up with the Cooking Bear who would occasionally cook and keep the camp orderly for Coon Skin Abbey. That very morning Blon’s Mama had baked fresh biscuits. She allowed him to take three of the biscuits; one each for Coon Skin Abbey, the Cooking Bear, and himself. She also realized the dangers of Blon’s trip and instructed him to be extremely careful.

After promising her that he would, he set out on his long journey. The first several miles paddling down the bayou were uneventful. But gradually the bayou became more and more narrow. Blon knew that the danger would begin at the bayou’s narrowest section. Therefore, he began to paddle slowly and quietly. After some disturbance, unexpectedly, a flock of birds rose into the air. This would certainly arouse suspicion among the Indians living close by. Blon responded quickly by paddling as fast as he could realizing the Indians would be gathering their bows and arrows. As the Indians appeared along the banks, the arrows began landing all around the pirogue with some flying directly overhead. Blon kept paddling furiously and after what seemed like an eternity, the bayou began to widen and finally the arrows were falling short. Relieved, he knew that he had made it!

By this time Blon was exhausted but continued to push himself forward. After several hours he could see the camp and someone on the porch was waving his arms. As he approached, he was astonished to see for the first time ever the Cooking Bear. Blon introduced himself and the Cooking Bear invited him in to relax. They sat and talked the remainder of the afternoon. At dusk, Coon Skin Abbey returned from the marshland. Surprised and excited to have visitors, he instructed the Cooking Bear to prepare a meal for the three of them. He did so and used the biscuits that Blon had brought him. They really enjoyed each other’s company. After eating they all laid down and slept soundly throughout the night.

When Blon woke up the next morning he could see his own children on top of his bed listening intently. They wanted to continue forever although it was time to get ready for church. They would have to wait for the next Sunday morning to hear the next episode.